The Power Of Prayer At The Western Wall

The famous Western Wall, also called “The Wailing Wall” is located in the farthest out area. It happens to be the last remaining item of the original temple of King Solomon, which over 2000 years ago had lodged the Ark of the Covenant. The temple of King Solomon was destroyed in 423 BCE by the Babylonians. 70 years later, it was then rebuilt by the King of Persia. It was destroyed once again, in 69 CE by the Roman Empire. The Kabbalah says that the ever Divine Presence of God will dwell within the Western Wall until the prophesied third temple is rebuilt. It is for this specific reason that people from all faiths have been pulled to the Western Wall, to cry, plead with a prayer for surgery or a prayer for money or sustenance for God to have mercy and heal all of their ailments, with the power of prayer.

According to 2 Samuel 7:13, King Solomon, the son of King David has built the temple to be a spiritual anchor for all mankind. It was a temple where all mankind would see God’s glory manifest. It also replaced the Tabernacle that the Israelite’s had carried into the desert. Within this temple was the most Holy Place, which is the site of the Temple Mount. In Genesis 22:1-24, Abraham had nearly sacrificed his son Isaac in this place and according to Genesis 28:11-19, this is the location where Jacob would have the ladder dream. This is also the very special location where all prayers go up to heaven.  For these reasons, people understand the power of prayer at this holy place. 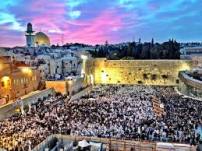 Submit a prayer for surgery

Today, there are millions of people from all over the globe and from every nation that come to pray at the Western Wall. They come just to experience His Divine Presence that touches all the lives that are seeking to be touched by Him at this location. There are millions of people who already discovered the power of prayer at the Western Wall. We have many testimonials from who had their prayers answered. From people who submitted a prayer for surgery to a prayer for money or a job. You might be the next person to experience that as well. Never underestimate the power of prayer. Sign up here

Why The Western Wall?

1 Chronicles 7:15. "Now mine eyes shall be open, and mine ears attend unto the prayer that is made in this place (Temple Mount)".

Any request that is said at the Wailing Wall, next to the Temple Mount, has great power. Many Famous people come for a prayer for strength or guidance.